Why use a Rust Inhibitor solution? 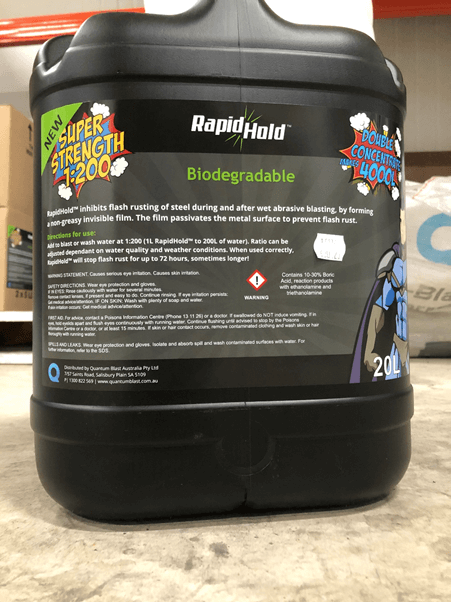 Flash rusting can present a significant problem when preparing metal structures for coating and painting, as it forms very quickly on steel that has been newly blasted, especially when sandblasting or other conventional dry blasting are methods are used. If not checked and controlled, flash rusting can fatally undermine the integrity of steel structures, boats, ships and machinery and cause protective coatings to fail.

Blasting mechanically damages the passivating layer, which protects the metal from corrosion. In the case of vapour abrasive blasting, water is also present on the surface and in direct contact with the metal through the ruptured passivation layer.
If there are salts on the surface, they will dissolve in the water to form an electrolyte solution and a corrosion cell will form. This fast-acting attack can cause visible rusting in as little as 30 minutes.

In dry blasting, the sandblasting media is not rinsed off leaving soluble salts and other contaminants on the surface to a certain degree.

In wet abrasive blasting, a slurry of water and sandblasting media is propelled at high pressure onto the surface. A combination of the blast media cushioned by water removes the coating/corrosion but soluble salts are not left on the blasted surface as the water dissolves them and then washes the salt away.

While light levels of flash rust can fall within tolerances for some coatings, in all cases they will degrade adhesion. Applying a coating over heavy flash rust will cause the coating to fail, as well as jump-start further corrosive reactions.

RapidHold™ SuperStrength is an environmentally friendly rust inhibitor solution that prevents flash rust while wet blasting. It is also a great additive for rinsing after soda blasting, dustless blasting, slurry blasting and vapor blasting. It effectively removes salts and other contaminates.

As a rust inhibitor solution, RapidHold™ SuperStrength is easy to work with and safe. It is soluble in water, non-hazardous, non-flammable, phosphate free and biodegradable. When used in accordance with the usage guide, it can prevent flash rusting for approximately 72 hours in normal conditions without rain. It is colourless and leaves no residue, surface salts, including chlorides, are undetectable after use. It leaves a perfectly clean surface ready for applying the protective coating.

A thoroughly clean surface provides far greater adhesion for the protective coating, greatly prolonging the life & performance of the coating, & protecting the painted surface far more effectively. This means far lower maintenance costs! Unlike some other cleaning solutions, which can cause problems of their own if not completely rinsed off the surface, RapidHold™ SuperStrength leaves no residues when used as directed.

While, hundreds of our customers who have used the RapidHold™ SuperStrength have reported no problems with the coating adhesion after application of the rust inhibitor solution, every coating is different and it depends on the surface profile and the substrate.

Compared to any other rust inhibitor solution available in the market, RapidHold™ SuperStrength is double the concentrate and therefore only half the quantity is required. The recommended dosage is 1 parts for 200; which results in a 4000 litre solution from a 20L can.

While light levels of flash rust can fall within tolerances for some coatings, in all cases they will degrade adhesion. Applying a coating over heavy flash rust will cause the coating to fail, as well as jump-starting further corrosive reactions. Coating specifications may indicate an acceptable time window between blasting and coating application.

Flash rust is a general corrosion attack that presents a significant problem for abrasive blasters. Flash rust is problematic for dry blasting as well as wet blasting as blasting damages the passivating layer, which protects the metal from corrosion. In the case of vapour abrasive blasting, water is also present on the surface and in direct contact with the metal through the ruptured passivation layer. It is suitable for wet as well as dry abrasive blasting as well as acid bath rust removal. RapidHold™ SuperStrength is extremely economical to use as it is double the concentrate and requires half the quantity.